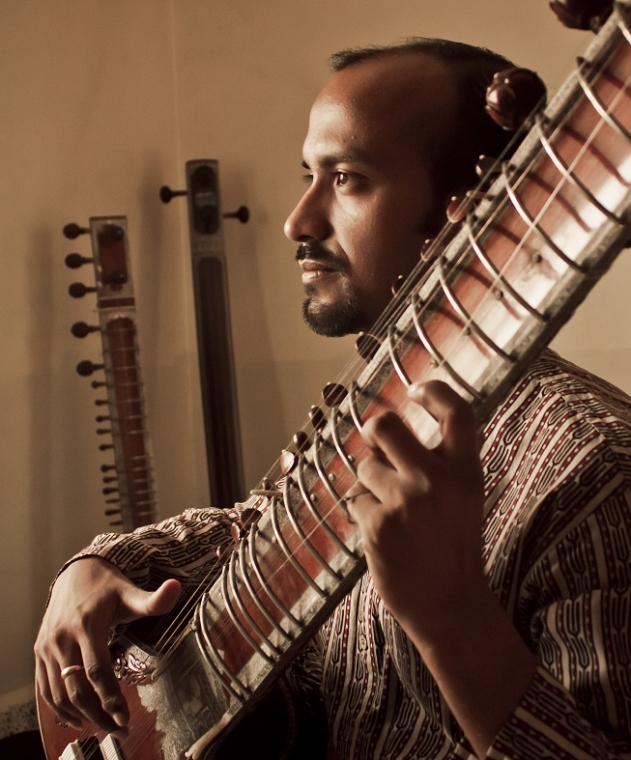 Indian Classical Music is introspective in nature. The music is based on various Modes called Ragas to express different emotions played over different Rhythmic Cycles called Tala. Each Raga has a certain melodic framework expressing a particular emotion. Also, there are different Ragas for different time of the day. In a concert 1 Raga is played for a long time to explore deeper into a single emotion before going into another. The Tala is an integral part of performance where the entire improvisation is based on the Tala. A lot of polyrhythmic patterns are played over a single Tala while improvising to express an advanced musical understanding and interaction between the melodic and percussive instrument.

Hindol Deb – Sitar
Hindol is one of the promising upcoming concert soloists of India. Hailing from the Maihar Gharana, he had the priviledge of being trained by different imminent teachers starting with his father Sri. Panchanan Sardar, Pt. Santosh Bannerji and late Pt. Deepak Chowdhury.
His performances are marked by elaborate Dhrupad Alap, Jod and later tantrakari. Though involved in several collaborative projects in different genres with Indian and international artists one can recognize his ability to switch completely while playing Indian classical. With a deep resonating tone of the instrument he explores the Ragas within its traditional framework with an experimental mindset.
Hindol was invited by the French ministry of Culture, Rikskonserter Sweden and the Academy of Carnegie Hall for music residency to work with several accomplished artists. His works combine Indian classical with Contemporary Jazz, Flamenco, Turkish, Nordic folk and Avant-garde music.
He has travelled extensively in countries like Germany, Sweden, Greece, USA, Japan, France and others to give concerts and and conduct workshops on Indian music in the schools and universities.

Polish-born drummer and percussionist Bodek Janke has been dubbed „above-average“, „outstanding“ and „a master of many dialects“ by international journalists in various musical situations.

Being born into a polish-russian musicians‘ family, it was obvious for him to approach a professional musical career from an early age. His mother Olga Janke taught him first piano lessons at the age of 3 and his aunt, Tatyana Kamysheva taught him composition and music theory.

At the Badisches Konservatorium Karlsruhe / Germany he received his classical percussion and music theory education. In his teenage years, Bodek was already an internationally acclaimed touring and recording marimbaphone virtuoso. From 1998 to 2004 he studied jazz-drums and jazz-composition at the Academy of Music of Cologne and graduated „with distinction“. He completed his studies in 2007 with a „Master of Arts and Music Performance“ – diploma from the City College of New York.

During his 6-year long stay (2004-2010) in New York City he had the opportunity to work with various artists such as David Liebman, Billy Harper, Ben Monder and Dave Binney. He performed several times at Carnegie Hall where recently his arrangement of „Wings“, a composition by Samir Chatterjee, was premiered by the Orpheus Chamber Orchestra before Anoushka Shankar’s performance. Regular engagements at local jazzclubs and venues (Iridium, Smalls, The Knitting Factory, 55 Bar) and international tours (the US, Turkey, Kasakhstan, Germany, Greece, France, Spain, Poland, Morocco and Russia amongst others) were a long lasting source and inspiration for his music and work. Furthermore he met his Guru (mentor), Pandit Samir Chatterjee and began his studies of Indian Classical Music and Tabla in New York.

In 2008 he was awarded both the „Jazzpreis Baden-Württemberg“, Germany’s highest-endowed award for jazz musicians and the „German Records Critics‘ Award“ („Preis der Deutschen Schallplattenkritik“, with Olivia Trummer’s CD „Westwind“). In 2010 he was voted „Best Soloist of the Year“ at the „Neuer Deutscher Jazzpreis“ – competition in Mannheim and he won the the first prize at the „4th International Bucharest Jazz Competition“. This year he also became scholarship holder of the Baden-Württemberg Arts Foundation, the „Kunststiftung Baden-Württemberg“.

Currently the intensely touring musician is focusing on recording his second own album „Global Dance Kulture“, teaching workshops and masterclasses and establishing a cultural center and educational institution in the mountain region of Lower Silesia (Karkonosze).