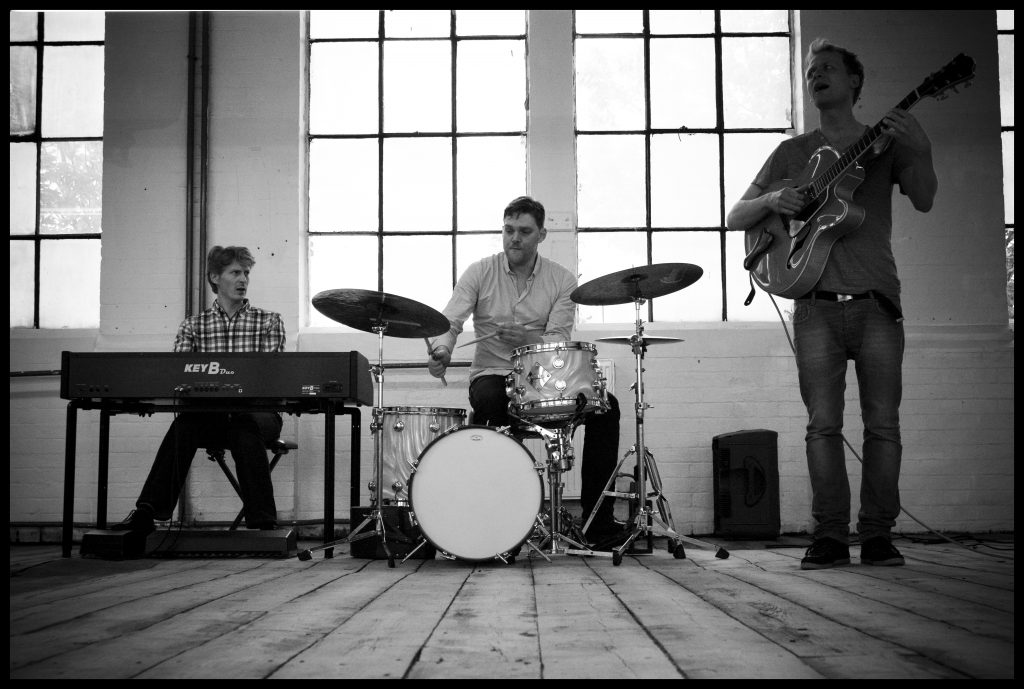 ACROBAT is a contemporary jazz organ trio, comprised of three of European jazz’s leading performers: Originally from Oxford, Copenhagen and Liverpool, the band was formed in the creative hub of London’s jazz scene in 2008. KRISTIAN BORRING, with his “intense and cool playing” (Jazz Special), has released 4 albums with his own quartet, 3 of which were on the
British Jellymould Jazz label [Hypercool… with warmth, confidence and a rhythmic hipness that’s thoroughly contemporary: The Guardian], as well as A Postcard to Bill Evans with Bruno Heinen on Babel [a model of quiet stylishness: The Telegraph]. WILL BARTLETT has spent two years touring with acclaimed organ quartet Draw by Four [..lots of groovin‘ going on…promised much and delivered more: Bebop Spoken Here], and his wide range of projects includes a recent duo album with Kate Mullins, Between Us [very absorbing: Kit Downes, ingenious!: Norma Winstone]. PAT DAVEY’S infectious energy and fierce drumming has put him in the company of Jasper Hoiby’s Phronesis and Soweto Kinch. He is a regular in spoken
word outfit Tongue Fu and samba group Rhythms of the City [beautifully judged sounds: The Guardian]. The album starts with Borring’s title track, a playful yet complex medium
swinger, much in the vein of some of his signature compositions with his quartet.
King Congas shows another side to his writing, as the band brings his infectious riff to life. Bartlett’s The Big Three is an odd samba with 3 beats in a bar that showcases Davey’s deep roots in Brazilian music. For K.V. is his tribute to the late Kenny Wheeler, whilst The
Iceberg turns the music of Alban Berg into a slow-burning groover, suspense building through the guitar and organ ‘battle’. The unpredictable accents and high-energy solos in Davey’s up-tempo Bodger and Me will delight and fascinate listeners. The party ends on a
high with the nonsense acronym T.K.A., a funky blues in the best Hammond
organ tradition.
ACROBAT have played around the UK, including venues in Cardiff, Oxford Birmingham, Cambridge as well as London’s Vortex jazz club, and the EFG London Jazz Festival. Following up on
their debut release Acrobat in 2012, Make Your Stand was recorded over two days at Steve Winwood’s legendary Cotswolds studio. They are currently planning a lengthy tour in early 2020.