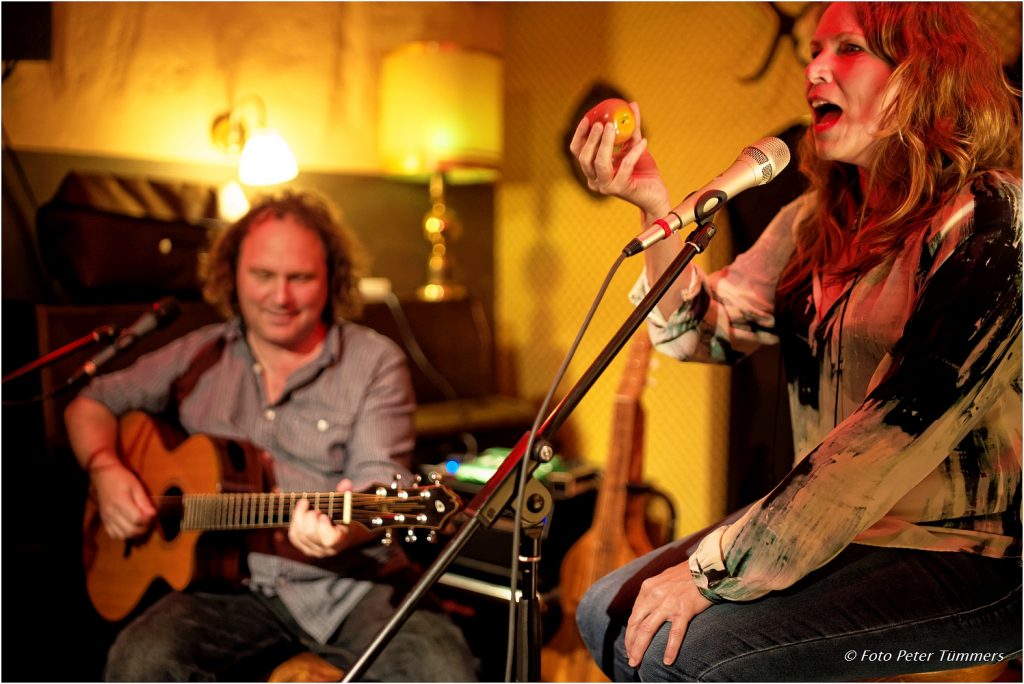 New Orleans-based vocalist/multi-instrumentalist Cindy Scott and guitarist Brian Seeger have been cultivating their magical musical connection for over a decade now. The pair have wowed audiences around the world, including concerts in Kazakhstan, Turkey, Morocco and across the US and Europe. Although they both have serious Jazz credentials (the list of which is too long to recount here: please see their websites), their performances and songwriting embrace a multitude of sounds including the music of New Orleans, Southern Soul, and Americana. Expect a wonderfully musical and personal journey which deftly carries the audience along with them. They obviously love what they do and sincerely believe in the transformative possibilities when performers get to share their art and craft in intimate settings like the Salon de Jazz.
CindyScottMusic.com
BrianSeeger.com

Cindy Scott
Cindy Scott is recognized in the vocal community as a singer’s singer. Her technical mastery and deep commitment to the lyric and musical expression has earned her loyal fans around the world. Originally hailing from Tupelo, Mississippi, Cindy Scott has lived a life steeped in all forms of American roots music, jazz, gospel, and southern soul. She came up in an extended family full of talented musicians and passionate educators, and was singing parts at the family jams at the age of 2. Cindy also plays flute, bamboo flute, guitar and hand percussion, and is a composer and lyricist.

Scott has released three CDs under her own name, and has a fourth one coming out later this year. Her most recent release, Historia, featured a slew of Grammy nominated artists, including Karrin Allyson, Jamison Ross and Randy Porter, and inspired Jazz Times to name her one of the top 10 jazz vocalists of the year. Her previous release, Let the Devil Take Tomorrow, won an OffBeat award for best Jazz release in Louisiana. Concurrent with her travels around the world performing, Cindy is an Associate Professor of Voice at the esteemed Berklee College of Music in Boston.

Although his musical excursions have been influenced by his studies with contemporary jazz figures such as Gary Burton and Ellis Marsalis, Seeger’s playing is well grounded in the blues and American roots music, as well as the sounds of New Orleans‘ streets. Seeger deftly melds these elements into an approach that is extremely heartfelt and individual; his aesthetic is fundamentally that of a jazz musician, but there is still ample space for ideas from other idioms.

Along with his accomplishments as a performer, Seeger is a well known jazz educator and composer. He holds a full time faculty position in the University of New Orleans Jazz Studies program, and was the director of the National Guitar Workshop’s Jam Summit. Seeger is also an award winning composer and producer. Many of his compositions have become part of the standard repertoire of the New Orleans soul-jazz community, and have appeared on numerous nationally and internationally released CDs. He has produced over 30 discs for other artists. His group’s 2017 release, Organic Trio Saturn’s Spell, spent two months in the top 10 of the US Jazz Radio charts, peaking at #2.